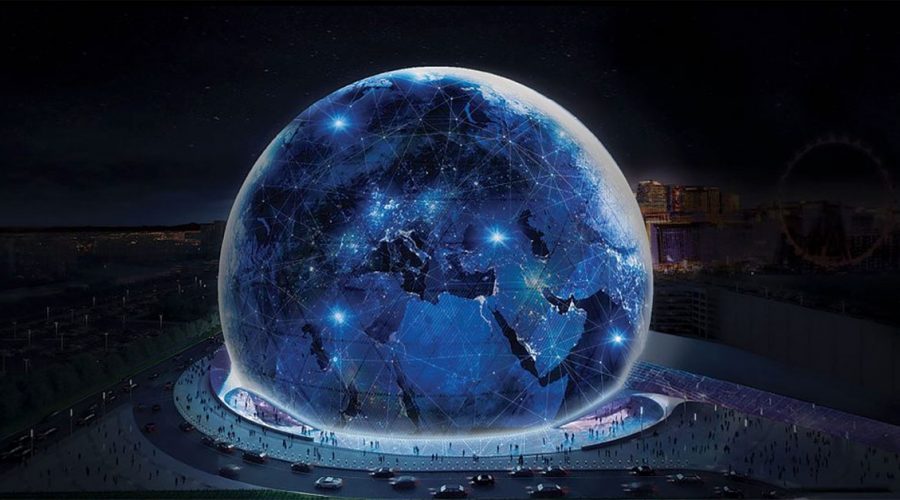 The Las Vegas skyline has nearly every iconic structure imaginable. We’re talking about an Egyptian pyramid, the Statue of Liberty, the Eiffel Tower, and even classic Roman architecture. But as great as these are, none of these structures will stand out and grab your attention nearly as much as an upcoming property down the street.

There’s a new project being built called the MSG Sphere, located just slightly behind The Venetian Expo that’s inching closer to opening for business. And if you live in Vegas or recently traveled there, you probably spotted it and wondered what it could possibly be.

Well it’s a massive 366 ft tall orb-like superstructure and a wildly ambitious project that first started in 2018. But in 2023, it will grab the attention of the entire world as a staple state-of-the-art venue with an ultra-high-tech setup, unlike anything the world has seen yet. So much so that the developers see it poised to become one of the most photographed buildings on the planet and redefine what it means to do live entertainment.

Either way, it looks like Vegas is yet again getting a facelift and it’s reinventing its skyline once again. And it seems Vegas will reinforce itself as the foremost travel destination for entertainment.

Madison Square Garden (MSG) Entertainment Corp owns and operates the MSG Sphere in partnership with Las Vegas Sands Corp.. This is the same company behind the Madison Square Garden, the home of the New York Knicks and New York Rangers, Radio City Music Hall, The Beacon Theatre, The Hulu Theatre, and Toa Group Hospitality. And the MSG Crop is one of the leading companies globally in the live entertainment industry.

Nearly 1,400 construction workers have been working on this state-of-the-art venue since 2018. But, considering its complexity and the sheer engineering feat required, it makes sense.

The MSG Sphere will weigh more than 13,000 tons when complete. Just its self-supporting steel exosphere alone, which spans 7 levels, weighs over 700 tons. While the roof uses 6 million pounds of steel and 10,000 tons of concrete. Even the compression ring that holds the structure in place weighs 121 tons.

But this design is critical. And it’s necessary to sustain the 42 million pounds of weight needed to support the LED display planes and audio system.

When completed, the MSG Sphere will stand 336 feet (112m) tall and 516 feet wide (157m). And it will produce a surface area of approximately 220,000 SQ FT, nearly five football fields. So it will become the largest spherical structure globally.

The final note here is that the developers plan to connect the MSG Sphere to the Venetian Expo Center via an indoor pedestrian bridge.

Inside, the MSG Sphere will have a column-free roof with a curved LED display plane, perfectly matching the structure’s contour. And the idea is to fully engulf both the guest seating area and the stage’s proscenium to create a fully immersive visual experience. Spanning 160,000 SQ FT (15,000 SQ M), larger than three football fields, it will easily do that. And when finished, it will become the world’s largest LED screen.

But that’s not all.

It will also boast a 16K-by-16K picture resolution or 19,000 x 13,500 pixels, making it nearly 100 times better than today’s best HD TVs. And that will also make the MSG Sphere the highest resolution LED screen on the planet.

The building will also feature an exterior display plane. In this case, it will house an even bigger one, spanning 580,000 SQ FT (54,000 SQ M). It’s so big that you can apparently see from space.

Either way, both of these LED units are fully programmable and customizable by the stage crew. And they will likely become the single selling point that will make the Sphere the most photographed building ever.

In terms of audio, MSG Sphere will feature a custom audio system that surrounds the audience. And it is designed in partnership with the German electronics firm HOLOPLOT.

However, this system will feature 3D Audio-Beamforming technology. This directs its 164,000 speakers in space using wireless signals. And essentially, the audio system shapes and steers the beams in two dimensions to create an optimal coverage range, effectively creating spatial audio.

But, crucially, it delivers pinpointed crystal clear sounds to every seat in the venue. And it will create a highly personalized experience for each guest that sounds like you have a personal studio. It also fully eliminates the need for a headset. To date, MSG Sphere will become the first of its kind to do this on this scale, and it will be the largest beamforming system worldwide.

Additionally, MSG Sphere also brings several advanced 4D technologies. Namely, the auditorium seats include haptic technologies. So the stage crew can manipulate the guest’s experience through scent, temperature, and wind. And the interior is said to have three layers of cooling.

Ultimately, these 4D technologies will create a more immersive experience, so guests not only hear sound but also feel it intensely. And the MSG Sphere is also doing this on a scale that’s never been achieved.

Regarding capacity, the indoor arena will accommodate 18,500 guests in stadium-style seating or 20,000 when standing room space is included across its seven levels. But in traditional Vegas-style, it too offers VIP accommodations. In this case, it has 23 VIP suites for private events. And there’s even separate VIP space below the stage for artists and even after parties.

According to MSG, the Sphere is expected to bring a wide range of live entertainments and events. Tentatively, it will host attractions, concerts, residencies, corporate events/product launches, award shows, and select sporting events (mixed martial arts and boxing) at launch.

Officials believe the technologies employed are a generation ahead of other venues and the current experiences available today. So they’re also formulating next-generation events that leverage the 4D haptic feedback to help the audience be even more connected. Right now, the main ideas are mass gaming and Esports.

However, considering the display is so unique, and the canvas size is unprecedented, MSG has built its own studio (MSG Sphere Studios) in Burbank, California. And they’re currently recruiting artists, designers, and engineers to create new forms of content that are specialized to the Sphere’s display. So only time will tell what’s truly possible.

Madison Square Garden Entertainment Corp plans another Sphere for London, with a construction date slated to start in 2025. And Las Vegas is merely a start to a broader collection of these venues worldwide with more locations to follow.

But for the Las Vegas Sphere, they expect the venue to open at The Venetian in the second half of 2023. More specifically, they expect it to open for the inaugural Las Vegas Grand Prix (FIA Formula One World Championship) in November. The company recently formed a multi-year partnership with Formula 1. And considering this reinforces Las Vegas as a major travel destination for sports and entertainment, the company also hopes to enter the Esport and mass-gaming niche. And eventually, move into more immersive storytelling and next-gen VR experiences.

What is the MSG Sphere going to be used for?

The MSG Sphere will attract a wide variety of entertainment. But, it will mostly host concerts, corporate events, award shows, and select sporting events.

Is the MSG Sphere done?

No. MSG Entertainment Corp expects the project to be completed in the second half of 2023 on or before the Las Vegas Grand Prix.

Madison Square Garden Entertainment Corp, which is the same group behind Madison Square Garden, Radio City Music Hall, The Hulu Theatre, The Beacon Theatre, and Toa Group Hospitality. And they’re doing this in partnership with Las Vegas Sands Corp, the owners of The Venetian Hotel in Vegas and many other properties worldwide.

How tall is the MSG Sphere?

The highest point is 366 feet tall.

How much is the MSG Sphere cost?

The venue is reported as costing $1.865B, up from its original projected cost of $1.2B.

Where is the MSG Sphere located?

The MSG Sphere is located just behind The Venetian Hotel at the crossroads of Koval Lane and Sands Avenue adjacent to The Venetian Expo Center.