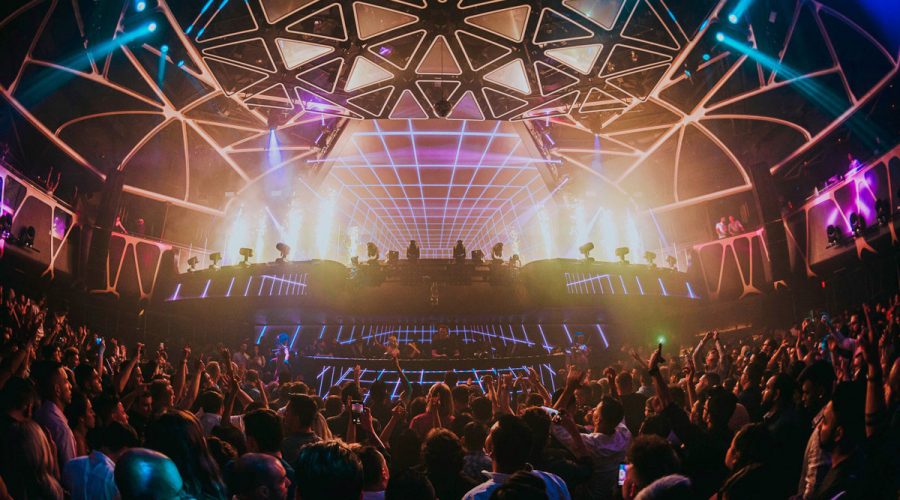 Looking for the best nightclub on a Thursday night?

Las Vegas is one of the unique cities where it’s both normal and often expected to see people going out during the week. And, in fact, it’s one of only a few cities worldwide that provides a nightlife experience during the week that’s equally as exciting as the weekend. So here the party never stops, weekday or weekend.

Instead, Vegas tosses away the midweek blues, and Thursdays mark the official start of an exciting new and long weekend ahead. And in Vegas, you have one less day between you and the weekend!

Thursday’s are also when most tourists arrive in town, and the day many locals begin gearing up for their weekend. And it’s the day the general traffic in the city starts to increase dramatically. Because of this, more clubs are open than earlier in the week. And there’s also a shift in the clubs’ atmosphere to more of a blend between locals and tourists.

Still, some of the nightclubs open this night are better than others. And there’s still only a small selection of nightclubs open compared to the weekend. So not all of them are ideal for every group.

However, the available options are very impressive. And they provide world-class accommodations, headlining DJs, and celebrity apprentices. So they’re sure to be a blast.

With that said, let’s cover the best Las Vegas nightclubs on a Thursday.

Located in the MGM Grand Hotel, Hakkasan is a world-renowned club offering a nightlife experience like no other since its grand opening in 2013. And today, it’s regarded as the best Thursday club to visit among most Vegas insiders.

This nightclub even has a separate venue called the Ling Ling Club on the third floor. And it’s arguably the best hip-hop club and lounge for Top 40s music, second to only the Heart of Omnia.

Either way, if you’re looking to experience a staple club here in Vegas, Hakkasan is definitely one to consider. And it’s easily one of the busiest venues on The Strip.

Located in the Venetian Hotel, TAO Nightclub is well known for bringing A-list celebrities to the party. But that makes sense. TOA has been one of the top-grossing clubs in the U.S for more than a decade. And it has a dry upscale atmosphere that perfectly matches the elegance of the Venetian. So their industry night is a favorite choice of many professional athletes and celebrities worldwide.

Experience a 10,000 SQ FT mega-club home to world-famous talents like Drake, Rihanna, and Jay-Z. Inside, TAO has three bars and eight private sky box VIP suites that overlook the main club. And they even have a 40 ft terrace that overlooks The Strip, a gorgeous view that’s wow-worthy. Plus, it doubles as a 5-star Asian Bistro, a spot frequented by many celebrities. But, TAO updates the decor, entertainment, and design of the venue yearly to keep each season fresh and exciting.

Unlike other venues, TAO plays a range of open-form music from Hip-Hop and EDM to the Top 40s. But on this night, in particular, they host Worship Thursdays. This event features mostly local DJ talent like Mike Attack, Greg Lopez, DJ Buza, and DJ CLA.

That said, given the atmosphere of TAO, it’s a long-standing favorite. And it’s a must if you want a more high-end and elegant experience than a transitional nightclub.

Located in the Paris Casino, Chateau Nightclub draws in a crowd with an outstanding view of the Las Vegas Strip. And while not a mega-club like its peers, they’re not afraid to get loud and let things get wild.

Tucked underneath the iconic Eiffel Tower replica, experience an outdoor patio club spanning more than 20,000 SQ FT and decked entirely in modern French decor. This club also features a breathtaking panoramic view of The Strip with performances from the legendary Bellagio Fountains.

In many ways, Chateau is like a smaller version of Drai’s nightclub. However, they don’t invest in headlining DJs. Instead, they feature primarily local DJs like SHADOWRED, Liz Clark, and Yo Yolie. That said, they’ve had plenty of celebrity appearances over the last year. Namely, guest appearances like Future, Wale, Mario, and even the Backstreet Boys.

Nevertheless, Chateau is definitely a solid alternative to Drai’s, given it’s strictly an outdoor rooftop club. And the fact that it’s smaller makes it far more intimate and easier to connect. It’s also a lot less intimidating than other clubs. And it’s an excellent option if you’re a hardcore Hip-Hop fan or want to party under the stars.

Located in Resorts World, the newest casino on The Strip, Zouk Nightclub pushes the boundaries. And it breaks away from the usual traditions in nightclubs by becoming the most technologically advanced club in Vegas.

Experience three clubs packed into a mega-club spanning 26,000 SQ FT. The main stage, called The Mothership, houses Zouk’s 30 world-class floor-to-ceiling LED pods, which are the backdrop to the stage. While its other two venues, Capital Bar and Empire, can act as separate clubs. But often, they join in the fun to create a single mega-club.

Either way, Zouk plays most EDM, Deep house, Tropical House, and Reggaeton music. But they currently have several of the highest-paid EDM DJs around. We’re talking Zedd, R3HAB, DJ Snake, Deadmau5, and MADEON, just to name a few.

So if you enjoy EDM music and want to see the best lighting performance in town, Zouk is currently unmatched. And it’s one of the rare clubs where you’ll get a similar atmosphere to a live performance at EDC.

Thursday doesn’t have to be yet another day separating you from freedom. At least, not here in Vegas.

Thursday’s are actually an amazing night to go out. And it officially marks the start of a new weekend. In fact, many insiders would argue it’s one of the best nights to go out since it’s equally as wild as Saturday, without the madding crowds.

So if you’re looking for something to do, at least now you know your options.