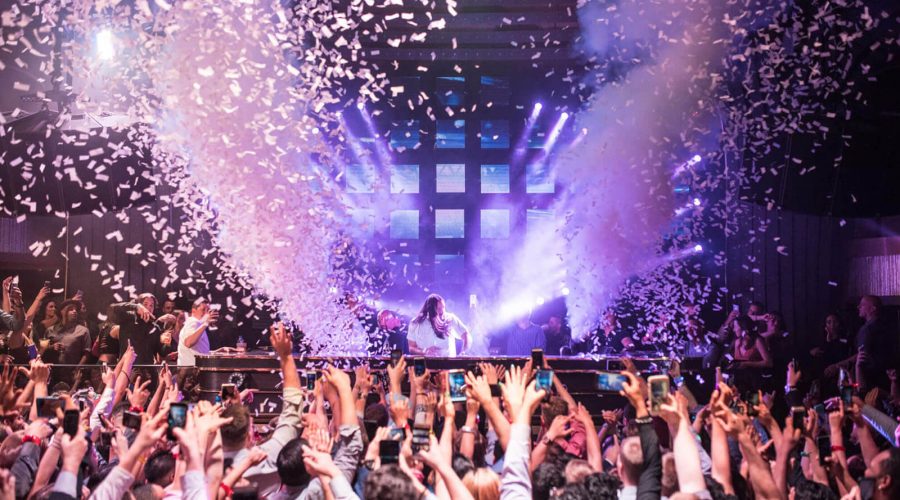 Are you looking for the best nightclub to visit on a Monday night?

Las Vegas is one of the strange cities worldwide where it’s normal and sometimes expected to hit the clubs and party on Monday’s. And as odd as it sounds, it’s actually a pretty epic night out and a great way to kick off your week.

In fact, many would argue it’s one of the best nights to go out in general, since you get a more low-key vibe than a busy weekend. And in that sense, it is definitely better for connecting with your friends and enjoying the nightlife experience.

Plus, you’ll also skip that dreadful hour-long wait at the door just to get through the line. Not to mention, Monday is also an industry night here in Las Vegas, which is great if you’d like to mingle with nightlife insiders from other nightclubs to build your network. Together, it’s a definite must if you’re looking for something exciting to start your week right.

That said, let’s cover the best Las Vegas nightclub on a Monday.

Historically, it used to be that Marquee was the best nightclub of the day. But, since Vegas reopened following the lockdowns, they’ve changed their operating hours and moved their industry night to another day. So these days, the playing field has changed.

Located in ARIA, JEWEL Nightclub is now the only nightclub open on Mondays. But, that’s not a bad thing—the opposite. On Mondays, JEWEL hosts its Flawless Mondays, and it’s actually a top-rated event filled with locals, which usually means it’s almost always packed.

Not to mention, only JEWEL delivers the modern luxury, and high-end aesthetic only the ARIA can offer. And you’ll be quickly wowed by its unique state-of-the-art, vibrant design and outstanding nightlife experience.

Experience a mega-club featuring two levels filled with many V.I.P. suites and a main dance floor with a one-of-a-kind 360º lighting wall. And prepare to be mesmerized by the epic visuals this setup creates.

Currently, JEWEL offers a rotating schedule of D.J.s in the E.D.M. and Hip Hop scenes, some of which are locals. Today acts like Murda Beats, Lil Jon, Angie Vee, and Mike Attack are the regulars featured on Flawless Mondays, though.

Besides great music, JEWEL Nightclub also has five distinctly themed private V.I.P. suites called Skyboxes. And these suites give you a second-floor aerial view of the action on the dancefloor below. But, The Blind Tiger, a modern take on a speakeasy, and The Gallery, a fine art photography display, are the most popular. Still, any of these are great options to elevate your experience and the ideal setup to host a bachelor or bachelorette party.

But, in general, JEWEL’s V.I.P. services offer an experience with far more action than most clubs. And there’s virtually no space between the V.I.P. ropes of tables and the dancefloor, which isn’t the case at other venues. JEWEL even has several V.I.P. tables on the stage, which are elevated and right next to the D.J. booth itself, rather than just kind of close to it. The result is that it’s a far better club for real parties, not just people watching.

On top of that, JEWEL isn’t nearly as strict about the girl-to-guy ratio, unlike other venues, where the guest list must have an even amount of girls and guys. So JEWEL is also a better option for most guy groups since it’s easier to get onto the guest list. And the promoters and hosts from other clubs generally bring plenty of girls along with them. So it’s usually not an issue.

Overall, JEWEL is a must. And considering it’s the only real option here, it’s an easy decision too.

Now that you know the best nightclub on Mondays, you can confidently avoid those dreaded start of the week blues. Instead, you have a great spot to add to your radar that’s ready to give you a fun night out, even on a weekday.

Can you party in Vegas on a Monday?

Yes. And Mondays are one of the very best club nights here in Vegas too. You can skip a lot of the heavy lines and stuffiness of clubs most on the weekend and still get a great atmosphere with a solid vibe.

Is Vegas busy on Mondays?

Yes, it is busy but not as busy as weekends. Mondays through Thursdays are historically less crowded and more relaxing than weekends since that’s when most tourists and vacationers end up visiting. But, compared to other cities, it’s still quite a heavy party.

What is Industry Night Vegas?

Industry nights are the nights when insiders, that is, nightclub employees, influencers, and sometimes celebrities, go out to other venues. Nearly all Vegas nightclubs participate in this practice, so you can find one happening every weekday.

Technically speaking, it’s a way for clubs to support each other. And it’s also a way to make the nightclub more balanced between locals and tourists or to pack up an otherwise slightly dead venue.

But nightclubs also reward these insiders with free entry, bottle service, and complimentary tables (when available). And it’s a clever way to have more trendy nightlife people in the club than normal or for them to build relationships within the industry for referral business.

However, industry nights do bring a few benefits to the guests of the clubs as well. Namely, you’ll have reduced bottle service minimums, better table locations, shorter lines, and better overall customer service.

So if you want a more balanced crowd (with more locals, that is), a special on bottle service (i.e., buy one get one, or some percentage off), and a better table location for less money, weekdays are the best times.