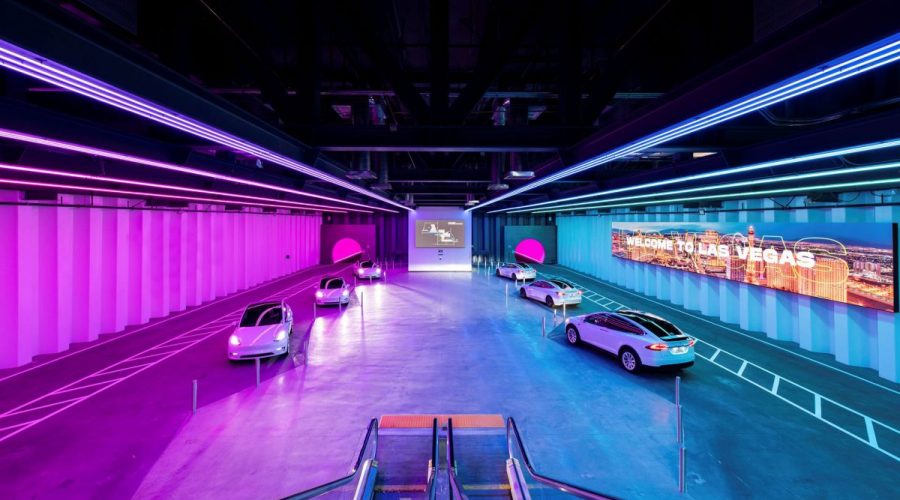 Curious about the Vegas Loop?

The Vegas Loop is arguably one of the most revolutionary construction projects in this city right now, outside of the forthcoming MSG Sphere. And it’s Elon Musk’s interesting idea to reinvent transportation and change how we navigate around cities.

With the Vegas Loop, high-speed tunnel transit is finally becoming a reality in the 21st century. And The Boring Company (TBC) is the first to pioneer and launch the idea.

In this post, we’ll discuss the company behind this project, their plans, and how it’ll work once finished. We’ll also tackle some frequently asked questions, so you’ll be well informed about it by the end.

The Boring Company, owned by Elon Musk, does just as its name suggests. They specialize in boring (creating) underground tunnels in major cities. And the company’s idea is to revolutionize our transportation system to create a more economical and eco-friendly network than we currently use. Ultimately, they aim to make congestion in traffic in cities a thing of the past while still moving people quickly and safely around the environment.

For the time being, the company will transport passengers in a human-controlled Tesla vehicle fleet, including the models X, Y, and 3. However, as the project unfolds, it will eventually become fully autonomous and remove the need for divers in the system entirely.

As of writing, The Boring Company has five product lines. The first is called the Loop, a series of 12-foot inner diameter underground tubes with LED lighting, a video system, wireless communication, cell phone service, fire safety systems, ventilation, and proper permitting. But, the company also has a Utility product, another 12-foot inner tube that doesn’t have additional features like cell phone service or ventilation. Instead, this product is mainly geared to provide utility access to engineers for citywide infrastructure. Next, they offer Freight, tunnels specifically designed to move shipping containers. And lastly, they offer Pedestrian, providing a safe way for pedestrians and cyclists to avoid surface road traffic.

What is the Vegas Loop?

The Vegas loop is The Boring Company’s underground transportation system that aims to connect various parts of Las Vegas to reduce congestion from traffic. And it’s the company’s flagship project approved by the Clark County government, where Musk is essentially paying the local government to accept the partnership.

The Vegas Loop is a high-speed underground public transportation system that uses all-electric Tesla vehicles for transportation. Therefore it is also zero emissions. Basically, passengers enter various stations on the surface level, then go underground into these Loop terminals. They are then transported to their destination through the tunnels in Teslas without intermediate stops along the way.

Ultimately, this project aims to reduce the amount of surface traffic and congestion in Las Vegas by taking the commute underground. And it’ll eventually do just that by connecting various parts of the city to make it easier to navigate.

As of writing, the company has finished its Las Vegas Convention Center terminal, also known as the LVCC Loop. And this station is now active and ready for use. However, the company anticipates that the completed Las Vegas Loop will include many other popular areas in Vegas. Including McCarran International Airport, Downtown Las Vegas, The Strip, and more.

So, you may be asking why they’re using an underground tunnel?

Well today’s surface roads all incorporate a 3D model-like design for their highways and interchanges. Sadly, this design makes them expensive and disruptive to build. Not to mention the existing transportation networks require a lot of valuable space in cities, which is already very scarce, to begin with.

Tunneling networks, on the other hand, offer a higher throughput of transportation and are more economically feasible. Tunnels minimize valuable surface land required by moving the entire transportation network underground. Yet, they don’t conflict with current operating transportation systems such as roads or sidewalks. So together, this functionality allows local governments to repurpose unneeded surface roads into community housing spaces or other purposes.

Yet, they can also be 3D, and, in fact, there’s no practical limit to how many layers of tunnels can be built. So in this sense, they’re more modular and can meld to any current or future capacity needs. And this flexibility is a key advantage since adding even one lane on our traditional surface roads often proves difficult.

Additional benefits include this transportation network is also weatherproof against rain, snow, wind, and severe temperatures. Also when designed correctly, tunnels are the safest places during earthquakes since they move uniformly with the ground. Yet both tunneling construction and daily operation don’t create any discernible surface noise or vibrations. Instead, they are both constructed and operate silently, making the network virtually invisible to the surface.

The Boring Company creates the Loop using Prufrock, a specialized tunnel boring machine (TBM). This new tunneling device launches directly from the surface, mines underground then re-emerges upon completion. Prufrock is a specially designed tool that can begin tunneling operations within 48 hours of arrival on site. And it doesn’t require excavating costly pits to launch and retrieve the machine, unlike conventional tools for this application. Instead, it merely arrives on a truck, tilts down, and begins mining.

Yet, Prufrock can tunnel more than 1 mile per week, making it 6x faster than The Boring Company’s previous generation tool, the Godot+. And it also mines continuously, without needing to stop every 5 feet like the Godot+. The result is that it can design mega-infrastructure projects in several weeks rather than taking years.

Additionally, The Boring Company has also standardized this method by reducing the tunnel diameter by roughly 30-60% to 12 feet. And, instead, they maintain the same internal diameter, making the final result more consistent for future construction projects.

Once completed, The Boring Company manages the excavated dirt by recycling a portion of it to make bricks and pavers for construction projects. And this is a more cost-effective and sustainable way to deal with the excess dirt than typical projects of this nature. A welcomed touch that will reduce cost and greenhouse gas emissions.

As of writing, The Boring Company has already finished the Las Vegas Convention Center Loop, abbreviated LVCC, which first opened in early 2021. And they’ve also received unanimous approval from the Clark County Commissioners to start the official Las Vegas Loop, a 29-mile tunnel network of 50+ stations later that year. These stations will include the resort’s corridor and go beyond, extending to Downtown Las Vegas.

However, this week TBC has revealed its first passenger station, which will be situated beneath the new Resorts World Las Vegas. And it’s officially the first of the 55 or so stops expected on the path. TBC has also received approval to start tunneling towards Downtown Las Vegas. And we’re expecting stations there to include The Strat, Fremont Street Experience, Slotzilla, Circa, and Plaza. TBC also has plans to expand to the Arts District and their president, Steve Davis, expects tunneling to begin sometime in 2023.

In the end, though, most casinos on The Strip will have future service stations. But TBC also has plans to expand to McCarran International Airport, Allegiant Stadium, and eventually Los Angeles. And ultimately, the system will let passengers hail a ride in the Tesla and go between casinos far more quickly and efficiently than using a taxi, Uber, walking, or other means of transportation on the surface streets. And the Vegas Loop will provide fast and convenient transportation to the entire Las Vegas community at large, be they visitors or locals.

The Loop capacity is a direct function of the system’s number of tunnels, stations, and operating vehicles. But, once completed, TBC expects the main Vegas Loop to hit 57,000 passengers through its 50+ stations. As of writing, the LVCC has already served over 700,000 riders and has been quite successful. So we expect the main loop to perform as advertised.

The system is and will always be extraordinarily safe. Tesla’s current fleet has achieved NHTSA’s top rating of 5 stars, making them the best in class regarding crash test safety. And these vehicles have the lowest probability of injury among all vehicles tested to date.

The Loop has also received the Gold Standard Award from The United States Department of Homeland Security Transportation Security Administration. This is the highest rating possible, where they evaluate a project’s security and emergency procedures. And the Loop features many first-class safety features to keep passengers safe.

Below is a list so you can feel reassured knowing it’s a safe and well-vetted system.

The Boring Company is making a revolution here. Vegas is merely a testing bed to double-check whether this idea can work in the real world. But, considering the methods and team behind this project, it’s sure to revolutionize the tourist experience by making navigating the city far easier. And that will directly cause a long-term increase in tourism for Nevada, which will make the governor here quite happy indeed. So we think this is a massive win all-around and the mark of a new era for navigating Las Vegas, eventually cities altogether.

What is the Vegas loop?

It’s an underground transportation system, similar to a subway, but uses Tesla vehicles to transport passengers directly to other stations.

How much does Las Vegas Loop cost?

Is the Vegas loop being built?

Yes, and its first station is at the new Resorts World hotel.

Where does the Vegas loop stop?

It will stop in Downtown Las Vegas by the Plaza Hotel just off Las Vegas Boulevard.

Is the Vegas Tesla loop free?

Yes, for now it’s free. But once the Loop is complete, the average price will be between $10-12 per ride.

Can you ride in the Tesla Loop in Vegas?

Yes, you can ride the LVCC but not the main Loop.