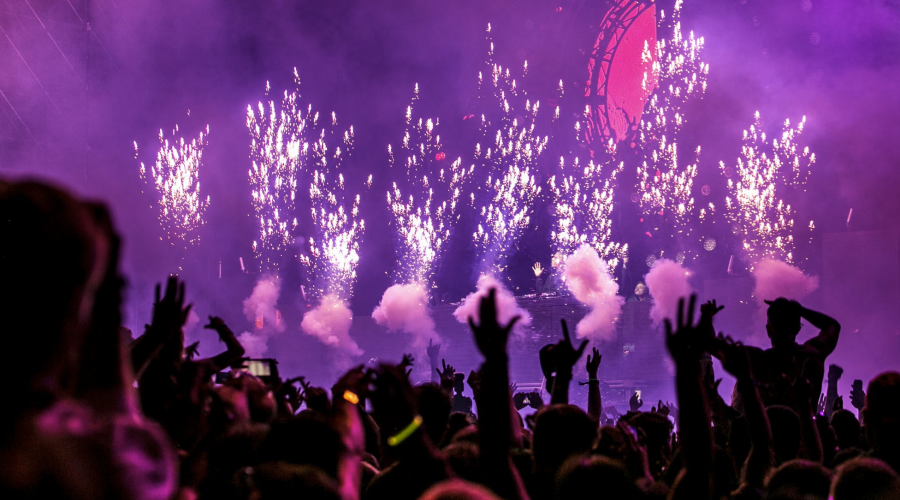 Are you trying to find the hottest nightclubs in Las Vegas? Well, there are plenty of options to explore since Vegas has some of the top nightclubs in the world. And each is ready to give you a nightlife experience that’s nothing short of breathtaking. So read on and get ready for an epic night out.

Note: we haven’t ordered this list in a particular way.

Located in The Cromwell, Drai’s Nightclub stands as The Strip’s only true rooftop Beachclub. And it offers a unique and stylish experience like no other.

Go 11 stories high and experience a multi-level club spanning 60,000 SQ FT boasting over 75 VIP tablets. But step outside to see Drai’s Beachclub, which features multiple rooftop pools, outdoor cabanas, and private bungalows. You can also walk up to the railing to see an unrivaled view of the Strip, and it’s one of the best angles in town. Either way, experience live performances from top acts like Tory Lanez, Gucci Mane, Rick Ross, Jeremih, and 2 Chainz.

Located in the brand new Resorts World Hotel, Zouk Nightclub pushes the boundaries of traditional clubs. And it’s among the most technologically advanced clubs in Las Vegas.

Experience three clubs packed into a single 26,000 SQ FT venue. The main stage, called The Mothership, features an impressive stage highlighted by 30 floor-to-ceiling LED pods that serve as its backdrop. The other two venues, Capital Bar and Empire, serve as separate clubs on specific nights but usually join in the fun to create an enormous mega-club. Either way, get ready to enjoy performances from acts like Tiesto, Zedd, DJ Snake, Deadmau5 and more. And hear loads of great EDM, Deep House, Tropic House, and reggaeton music.

Located in the MGM Grand, Hakkasan is a world-famous mega-club like no other. And it’s the flagship nightclub created by the largest nightlife company, the Hakkasan Group.

Experience its massive main room spanning 10,000 SQ FT, where you’ll see performances from headlining DJs like Tiesto, Kaskade, and Steve Aoki. Or Top 40 artists like TYGA, Lil Jon, Ludacris, and Pusha T. But, if you want something more relaxed and low-key, there’s also The Ling Ling Club, which has a totally different vibe. And it’s a relaxing area to connect.

Located in Caesars Palace, Omnia Nightclub is easily one of the most jaw-dropping clubs in Las Vegas. And its design is sure to impress.

Omnia Nightclub offers three separate venues that sprawl multiple levels across 75,000 SQ FT. And each level is nothing short of impressive. You’ll experience world-class lighting and sounds in the Heart of Omnia, the main dancefloor, from headlining DJs like Calvin Harris, Martin Garrix, Kaskade, and Steve Aoki. Or shake things up with gorgeous panoramic views of the Las Vegas Strip on the outdoor terrace. Either way, though, you’re sure to be wowed by this club.

Located in Encore, XS provides a very upscale, elegant, and intimate nightclub experience. And it claims to be the Number #1 club in the U.S. five years in a row.

Inspired by the curves of the human body, XS melds the traditional mega-club setting with luxurious architecture, signature cocktails, high-end bottle service, and an open-air nightswim during the summer. But day or night, get ready to experience a lavish venue featuring top acts like The Chainsmokers, Dillon Francis, Marshmello, and Diplo.

Instead of mostly focusing on EDM, the LIGHT features an open music format. So expect regular performances from mainstream Top 40s and Hip Hop acts like 6LACK, Majid Jordan, and Masego. Yet, it’s also more relaxed and stress-free than most, despite being technically a mega-club. And it provides outstanding bar access and a more stadium-style table layout that’s free of restricted access.

Located in ARIA, JEWEL Nightclub brings this casino’s modern luxury and high-end aesthetic into the club scene. Yet it also delivers a vibrant and unique state-of-the-art design too.

Experience two levels filled with VIP suites and its main dance hall with a one-of-a-kind lighting wall with 360º movement. The result is a mesmerizing visual experience perfectly synced to the music from top acts like Lil Jon, TYGA, and Steve Aoki.

Experience a 40,000 SQ FT nightclub that converts from an open-air Dayclub complete with a patio overlooking the strip to one of the hottest nightclubs in Vegas. And it comes complete with seven bars and three separate venues, each with different music. But, on Sundays, Marquee has a Nightswim called Drenched After Dark, perfect to get out on the patio and enjoy its luxurious daybeds and cabanas. Either way, though, this club offers an open music format ranging from EDM to the Top 40s with artists such as Fergie, Benny Benassi, Alan Walker, and DJ Pauly D.

Located in the Venetian Hotel, TAO Nightclub is known for its frequent A-list celebrities, and it’s also one of the top-grossing clubs in the U.S.

Experience this 10,000 SQ FT mega-club that’s been home to world-famous headliners like Drake, Rihanna, and Jay-Z, for more than a decade. Inside it offers three bars, eight private sky boxes overlooking the main room, and a 40 ft outdoor terrace overlooking The Strip. And it’s the perfect venue to enjoy music ranging from Hip Hop to the Top 40s.

Now that we’ve covered the best nightclubs in Las Vegas, let’s talk about everything you may need to know about these nightclubs in general.

What is a VIP Host in Las Vegas?

The VIP host or just “host” is your direct connection to the nightclub. These fine folks are in charge of customer service for their VIP services, including tables, bottle service, and private parties. They can help you with pricing, availability, exploring options, or any other needs you have in this regard. They’re also a foolproof way to gain entry into the most exclusive events, say New Year’s Eve, when the events are technically at max capacity.

How much are nightclubs in Vegas?

The cover charge varies from club to club. But in general, the cover for most Las Vegas nightclubs ranges between $20-60 for men and $10-30 for women on regular weekends. That said, the price does go up on holiday weeks like Memorial Day, Labor Day, 4th of July, Halloween, and New Year’s Eve. On those weekends, be prepared to pay closer to $50-200 for men and $50-100 for women. The price of cover can also increase if there’s a special event or performance by certain headlining acts like The Chainsmokers, Future, Calvin Harris, Marshmello, and others. And in these situations, the price would reflect a holiday weekend.

How much does bottle service in Vegas cost?

A basic bottle service of vodka or rum starts around $500 and goes up to $10,000 for the VIP dance floor table(s) featuring a group of cocktail waitresses delivering champagne with sparklers.

While pricey, the nightclub does provide all the necessary mixers. So you can make loads of cocktails right at your table, drink at your own pace, and make them as strong as you’d like, with no over icing. You also benefit from having a place to sit and relax in the club, which is great considering the seating is fairly limited otherwise.

Are clubs free in Vegas?

Vegas nightclubs can be free, especially if you know a VIP host. They’d be happy to wave you in and even provide a complimentary table on top of it in some situations. But, for most guests, the easiest way to get in free is to register yourself and party onto the guestlist for the nightclub beforehand. You can get onto the guestlist by reaching out to a promoter for the club. But in time, WGTV will become a resource for this too.

However, while this is a free way to get in, it doesn’t guarantee entry. On special events or busy holiday weekends, the club can easily reach maximum capacity, at which point they decline access to people even on the guest list. So keep that in mind.

Another option is reserving bottle service for your table. But, this method already assumes someone in your party is paying for a table or you’re paying for it as a group, so while helpful, it’s not technically free. Instead, this is more of a discount.

What do you wear to Vegas Clubs?

Most clubs have a similar dress code and the ban the following items:

Vegas nightclubs all want their guests to have a consistent high-end look throughout the club. So, we’d suggest carefully looking over their dress code prior. But, in general, most of them require business casual attire. Wearing anything else means you risk being declined entry.

That said, if you already know the staff at the club, since you’re a regular here in Vegas, the dress code is far more lenient. And you can get away with wearing a lot more exciting clothing options than usual.

What time do Vegas clubs close?

While most Vegas nightclubs technically list their operating hours from 10 PM or 10:30 PM to 4 AM, the actual time they close depends on the event and club staff. The club can easily extend the hours until as late as 6 AM if there’s a celebrity host. But, either way, they’re not open 24 hours, even though Vegas itself is a 24/7 town.

That said, if you want an after-hours spot to keep the party going, consider checking out Drai’s After Hours, which operates until 10 AM, or going to a strip club like Sapphire or Spearmint Rhino. These are easily some of the best after-hours spots in town.

Are Las Vegas clubs open during the week?

Yes. There are Las Vegas nightclubs open during the week. But, not every club is open every day. So you’ll want to check to see which clubs are open on a particular weekday by visiting their events page.

But there you have it. There’s our list of the best nightclubs in Las Vegas and some tips to maximize your nightlife experience.

How much are Las Vegas nightclubs?

General admission at most nightclubs is between $20 to $100 for men and $10 to $50 for women. But, these prices vary based on the DJ performing and whether it’s a holiday weekend like the 4th of July or Labor Day.

How do you get into nightclubs in Vegas?

The easiest way is by connecting with a club promoter or a VIP host. Both of these folks are employed by the nightclub and can help you get onto the club’s guest list or set you up with a bottle service reservation. You can find promoters walking around on The Strip near the clubs during the day. But, you can also connect with them through social media.

What is the most high end club in Vegas?

That would go to Hakkasan Nightclub, which many refer to as the world’s most expensive club. And since it’s so luxurious, its prices for drinks and service reflect that.

How expensive is clubbing in Vegas?

The cover for most nightclubs in Las Vegas ranges between $20-100 for men and $10-50 for women. So it’s not outrageously expensive, but it isn’t cheap either.

Is Vegas fun during the week?

Yes! But Vegas is slower during the week, as many shows have shorter operating times. So keep that in mind. Still, there’s a nightclub open every weeknight, so you can easily find an exciting spot to go out on our list above. Just check online to confirm the venue is open that night.