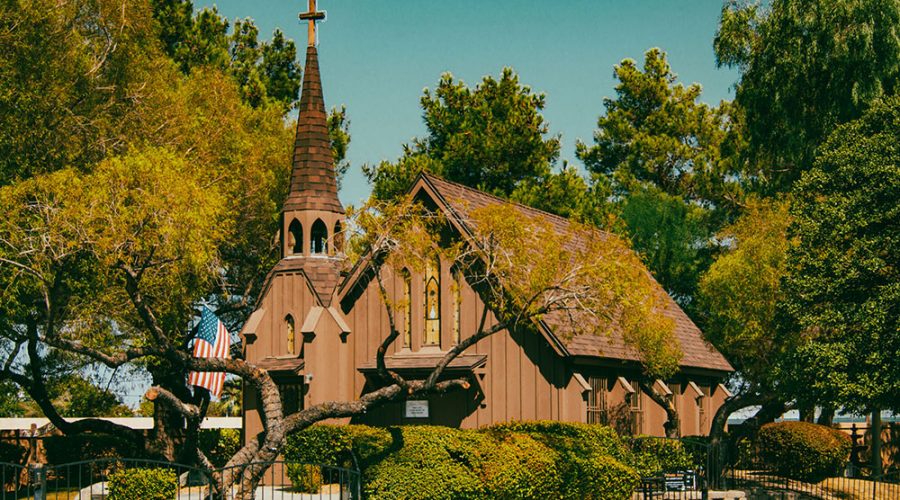 Over 100,000 couples get married annually in Las Vegas. And it’s the highest-ranking wedding destination worldwide, since Vegas doesn’t require a blood test or waiting period. Instead, getting married here is easy, fun, and very affordable. You can even get it done the same day if you’d like. Not to mention, Las Vegas is easily one of the best places for a honeymoon, considering the ridiculous entertainment here. And it’s without question one of the entertainment capitals of the world.

But, with so many couples flocking to the city weekly, well over 50 wedding chapels are available (not including standalone wedding venues). And the options are seemingly endless for you and your partner. So, you can imagine that finding the right wedding chapel could be a somewhat complicated task.

With that said, let’s cover the best wedding chapels in Vegas. And the top venues to consider, regardless of whether you want something spontaneous, themed, or even more lavish and planned.

When it comes to history and tradition, not much survives in Vegas. We’ve seen historic casinos like The Sands (Frank Sinatra), The Aladdin (Elvis), and many others demolished to make room for bigger resorts. But then there’s Graceland Wedding Chapel.

Located on Las Vegas Blvd South, Graceland Wedding Chapel is famous for originating the tradition of Elvis-themed weddings and vow renewals. First opened in 1939, this Chapel has been around for over 80 years, in the very same spot, which is nothing short of amazing.

However, it wasn’t until 1977 did they change the name to honor and commemorate the life of Elvis Presley. But it was that very same year they created the famed Elvis-themed wedding ceremony, which has been a wildly popular wedding theme and a go-to option for many Rock and Roll fans since.

So it’s no surprise that Graceland offers an exceptional Elvis-themed package, including impersonators presiding over the ceremony and even copies of his marriage certificate to Priscilla. But they also have other services like on-site photography, video recording, floral arrangements, live broadcast services, and complimentary limousine service. And they’re one of few venues offering a full-service facility. Plus, they even supply ceremonies in eight other languages.

Today, with hundreds of thousands of ceremonies under its belt, Graceland has seen many famous names in music and Hollywood. A short list includes Jon Bon Jovi, Rob Zombie, Johnny Depp, Jay Leno, The Beastie Boys, and KISS. And these days, they’re one of the most iconic and highest-rated wedding chapels in Vegas.

So if you’ve ever thought about an Elvis-led wedding, now’s your chance to experience it firsthand. And if you’re even remotely considering an Elvis wedding, Graceland is the place to go.

Little Church Of The West

Located on Las Vegas Blvd South, The Little Church of the West stands as one of the most recognizable chapels in Vegas. And it gives guests a chance to exchange vows in a historic landmark.

First opened in 1942, Little Church of the West was one of the first freestanding wedding chapels built for this purpose in Vegas. And it was the venue featured in Viva Las Vegas, the movie starring Elvis Presley. Here 80 years later, it still stands as one of the city’s most special places and a historic landmark. And to date, it’s the only venue on The Strip featured in the National Register of Historic Places. That’s because it’s the oldest existing structure on The Strip, and its unique architecture, a replica of an old west mining town church.

Today, Little Church of the West has housed thousands of ceremonies graced with celebrities throughout its history. Some notable guests include Angelina Jolie, Billy Bob Thornton, Felix Jackson, George Sanders, and Cindy Crawford.

The venue offers The Garden, a stunning outdoor European-style setting for your ceremony. But they also offer ceremonies at the Las Vegas Sign and even Las Vegas Harley-Davidson. Plus they’re also one of few venues to offer a Johnny Cash Impersonator to perform at the ceremony.

First established in 1971, A Special Memory Wedding Chapel now has over 50 years of experience providing wedding and renewal ceremonies. But they’re easily best known for their world-famous Drive-Thru Wedding Chapel, where you can get married at a drive-thru window without leaving your car. Very convenient. And this is a popular area featured in many movies and TV shows.

But if a drive-by wedding isn’t your style, they also offer helicopter weddings. And these are hosted at the Grand Canyon, Valley of Fire, Mt. Charleston, or Red Rock Canyon, perfect for those wanting a more elegant and adventurous wedding or renewal.

Chapel Of The Flowers

Located on Las Vegas Blvd South, Chapel of the Flowers is yet another top-rated Vegas wedding venue famous for its legendary ceremonies.

First, open in 1960 and now in business for nearly 70 years, Chapel of the Flowers is yet another long-standing option in town. But, unlike rivals, they’re one of the few venues providing complimentary wedding concierge services for your entire celebration. They can help arrange dinners, book accommodations for you and your guest, and even tours. And, you’re guaranteed to have an experienced concierge team along your side (the whole time) to help create an all-inclusive package accessible by email, phone, or in-person appointments. So your entire wedding planning remains hassle and stress-free, regardless of its complexity. They also offer helicopter flights, so you can see a breathtaking view of the Las Vegas Strip, Grand Canyon, Lake Mead, and Hoover Dam.

Chapel of the Flowers even boasts several stunning reception venues in one, letting you pick the right spot depending on guest count and your style. Experience the classic white Victorian Chapel with traditional wooden pews and crystal chandeliers, the Magnolia Chapel with marble mosaic floors and frosted glass, the La Capella Chapel inspired by modern 5-star  Vegas resorts, The Glass Gardens Wedding Chapel for a casual garden-themed wedding, and Gazebo for a fairy tale outdoor setting. So there’s plenty to choose from, regardless of your style.

Located on Las Vegas Blvd South, Viva Las Vegas Wedding Chapel is yet another top-rated venue. But it takes the cake as the best all-inclusive wedding chapel, given its versatility.

Established in 2000 by Ron Decar, a professional singer for more than two decades, Viva Las Vegas Wedding Chapel has won nearly every award imaginable in the city. We’re talking about the Best of Las Vegas, Best of Nevada, and even the Governor’s Award. But it makes sense since they offer one of the finest traditional Vegas weddings around, where each party even receives a complete rehearsal and outstanding customer service from a caring coordinator.

Yet, they are the only chapel providing a theatrical-themed wedding for a wild fantasy only Vegas can deliver. Of course, they have classics like Elvis. But did you know they also have Tom Jones, James Bond, Dracula, Marilyn Manson, King Arthur, King Tut, Austin Powers, and 29 other wild and crazy characters? And each comes complete with decor, theatrical lighting, and even fog effects. So in this aspect, they’ve truly outdone themselves.

Still, they’re the only gay-owned-and-operated chapel in Vegas specializing in LGBTQ weddings, whether traditional or themed. They also offer destination weddings at the Vegas Sign, Nelson’s Landing, and Valley of Fire. And even a Drive-Up option to get married in that iconic pink 1964 Cadillac convertible. Plus, they have four unique reception settings, including The elegant Main Chapel with vaulted ceilings, The Gazebo Chapel for a romantic outdoor setting, The Garden Chapel for a lush backdrop, and the Doo Wop Diner for a 50’s-era decor.

Well, there you have it. Now you know the top wedding chapels here in Vegas. And you have several tried and true venues that have staved away the competition. So let’s tie that knot with confidence.

How much do wedding chapels cost in Vegas?

The cost for wedding chapel services in Las Vegas varies. On the lower end, you can find chapels to marry you for less than $100. That said, you can also find many high-end venues costing $500 and up. But on average, $200 is what most typical wedding chapels charge for a mid-range package.

Can you just show up in Vegas and get married?

Yes, for the most part. But, some of these venues will be booked that day, so you’ll risk being denied. For this reason, it’s best to book online or call them a few days beforehands to confirm a slot is available. However, you don’t have to pre-register online at the Las Vegas Marriage Bureau. So you can just show up there, but pre-registering will save you time waiting around.

What documents do I need to get married in Vegas?

The only documents you need are Proof of Name and Age, which you can verify using a valid driver’s license, military ID card, passport, or other government-issued ID.

Can you get married in Vegas same day?

Yes. You can both receive your marriage license from The Marriage License Bureau and then get married the same day here in Las Vegas. And you don’t need an appointment to go to the Bureau either. Instead, all you need is to book your favorite chapel.

How long does it take to get your marriage license in Las Vegas?

Well compared to a traditional route, the process here in Vegas is nearly immediate. And, you can have your license in roughly 15-45 minutes, depending on the line at the Bureau.

Why is getting married in Vegas so easy?

Unlike other states and counties, Las Vegas (Clark County) waived the requirement for blood tests and waiting periods. And over the years, it’s become a wildly popular wedding destination because of this decision.

Do I need birth certificate to get married in Las Vegas?

No. But you can bring it if you’d like to use that as your form of valid government-issued ID. And it would be a good alternative document if you don’t have a driver’s license or passport.