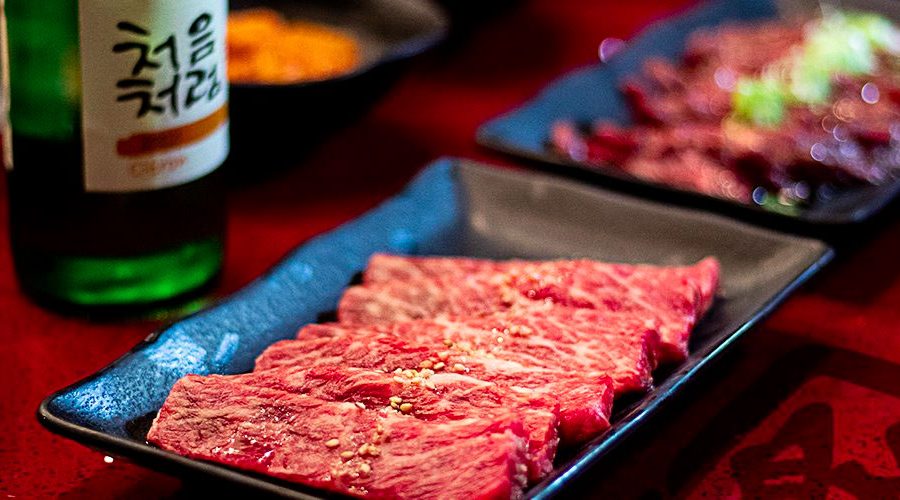 While most think a trip to Las Vegas is all about having fun, gambling, and treating yourself in new ways, eating is also a big highlight of Sin City.

And in fact, Korean barbecue is a long-time Vegas favorite and a big hit amongst many visitors. With KBBQ, you get the unique experience and the thrill of grilling your own expertly marinated meat. And the soft sizzling sounds of the table grills are a sound that never gets old. Not to mention, the intimate and fun atmosphere of these restaurants also makes them an excellent outing for a group of friends, and a tasty one at that.

Like L.A., Vegas has a thriving Chinatown filled with several infamous Korean barbecue restaurants ready to wet your pallet. And there are even some options on The Strip itself. But there are roughly 31 KBBQ restaurants in town, all offering timeless favorites like bulgogi, galbi, pork jowl, kimchi, and ban-chan. So finding the right one quickly could be a bit tedious.

With that, here’s our list of the best Korean barbecue restaurants in Vegas.

Hobak Korean BBQ is a longtime favorite located on Spring Mountain Road, and it’s now back and better than ever. Hobak is a thriving South Korean-founded restaurant group with 12 restaurants globally across 6 franchises.

Open daily for lunch and dinner, Hobak is known for its quality food, incredible ambiance, and excellent customer service where the servers cook for you – a rarity with this type of cuisine. So sit back and relax. The restaurant itself is designed to replicate an old street in 80s Korea, which immediately gives guests a feeling of nostalgia for their childhood. And their meat display also replicates old fashion Korean style by letting customers watch meats prepared by the carvers in the Butcher shop.

They also offer soups, noodles, and side dishes on the menu. Most notably, kimchi, chili paste, or tofu stews, honey tartare, fried rice, and several types of Ramen. While for drinks, they have a wide selection of worldly beers, including Korean beers, wine, flavored Soju, and signature cocktails like Mango Soju.

Hobak also provides the Hobak meal kit and four Bento boxes, letting you enjoy their best selection at home so you can take the delicious meals with you on the go. But they do support delivery and take-out services through Uber eats, GrubHub, and Postmates.

That said, if you enjoy quality over quantity, Hobak Korean BBQ is easily the number one place, and your taste buds will definitely thank you.

Gen Korean BBQ House is a national change chain with 31 locations across the US, including several restaurants here in Vegas. However, the closest location by far is on The Strip in the Miracle Mile Shops. Yet, despite its national size, Gen Korean BBQ House managers deliver a truly unforgettable experience.

Open daily for dinner until 12 AM, Gen’s is praised for its extensive all-you-can-eat menu. And to say their menu is huge is very much an understatement.

Some of their roughly two dozen KBBQ options include Kobe beef belly, ribeye, chadol, beef bulgogi, pork jowl, and Hawaiian steak. But they also have many fish options, including garlic calamari, shrimp, Cajun shrimp, and even baby octopus. Yet, they also have traditional Korean Ban-chan side dishes like spicy cucumber, radish, kimchi, and edamame. And they offer a full suite of standalone non-KBBQ dishes, including Korean tacos, sliders, stuffed jalapeño poppers, volcano chicken, five carpaccio dishes, and 12 specialty sushi rolls. And you can wash it all down with drafted bottled beers, Soju, Sake, cocktails, party bowls, and even Korean pop drinks like Electric Blue Lemonade.

Simply put, Gen’s leaves you little room for complaints. Their food and drink menu are both incredibly robust. And considering their a colossal chain, clearly, this strategy is working for good reason.

Located in the newly renovated Park MGM Las Vegas, Best Friend remixes Los Angeles with Las Vegas, combining their food, music, and culture into a unique, one-of-a-kind restaurant. So much so that founder Roy Choi, a Korean Chef, has been featured in many headlining publications, including Food & Wine, G.Q., New York Times, and the Observer.

Open daily for dinner until 11 PM or 12 AM, Best Friend is designed to encapsulate Koreatown and give you a portal into the streets of L.A. with a unique Vegas twist. And the idea is to mix both cities together and showcase why they’re considered “best friends.” With that, their menu combines many Korean barbecue and American late-night favorites.

That said, though, their menu is huge, and it’s quite incredibly diverse. They offer Korean barbecue choices like bone-in short ribs, pork belly, jidori thighs, and bulgogi. But they also have Vegas classics like 34-ounce bone in ribeyes, grilled fish, buttermilk fried chicken, and shrimp cocktails. Then there are several bowls like kimchi fried rice or Ramen, street corn, and a handful of Ban-chan dishes like kimchi, daikon, and marinated cucumbers. But they also have a comprehensive drink menu featuring slushies, cocktails, draft or bottled beers, mocktails, Sake, and wine. And you can round it all out with a tasty dessert like Mango Cheesecake or a Bathtub Ice Cream Sundae.

Best Friend doesn’t offer takeout options or delivery, though, so your only option is walk-in and dining. But considering their enormous menu and fair pricing, that shouldn’t be a problem. Stopping by wouldn’t be a decision you or your stomach would regret.

Located on Paradise Road next to Virgin Hotel Las Vegas, Gangnam Asian BBQ is another long-standing restaurant. And it praises itself for exceeding customer expectations, especially those who appreciate taste.

Open daily from 11:30 AM to 1 AM, Gangnam is a smaller and more intimate restaurant than most. But they bring a unique combination of foods to the table. Instead of traditional Korean barbecue alone, they put an exciting spin on it by simultaneously offering Japanese barbecue, also known as Yakiniku. So at this restaurant, chefs from Japan and Korea come together to create a unique Japanese Korean concept that’s been a massive hit for a decade.

Gangnam uses certified Angus and Kobe beef. And they have many traditional KBBQ favorites, including spicy pork, filet mignon, prime kalbi, Kobe beef, pork belly, bulgogi, and short rib. But they also have Japanese tapas, like Harami Miso, spicy Ramen, and steamed eggs. And they complement that with a diverse selection of appetizers like fresh oysters, carpaccio, calamari, poki, fried dumplings, and tempura.

Gangnam was founded in 2013, and considering they’ve survived over a decade, well, it definitely seems it’s been there for a good reason.

And there you have it. You now have a list of timeless options to sink your teeth into for that spicy KBBQ flavor.