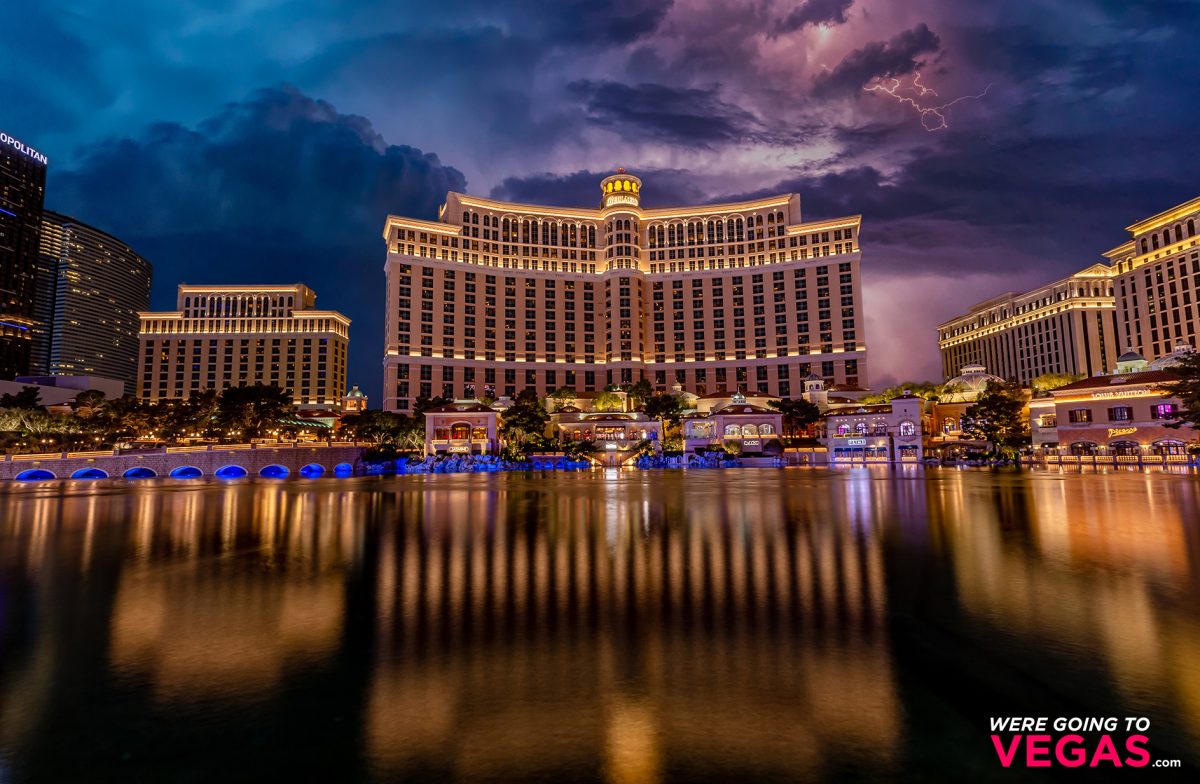 Las Vegas has never had a shortage of impressive displays that are well worth checking out when you visit, but the Fountains of Bellagio is especially noteworthy. This magnificent water show became an instant hit when it debuted in 1998, and today it’s rightly considered to be one of Vegas’s biggest attractions.

When the celebrated Dunes hotel was torn down in 1993, resort magnate Steve Wynn snapped up the property and started planning something different. Five years later, he unveiled his vision to the world at the grand opening of the Bellagio resort.

Featuring elegant design cues taken from Renaissance Italy, an extensive collection of fine art on display, and a breathtaking aquatic show performed by Cirque du Soleil, Bellagio was clearly aimed to move straight into Vegas’s top spot in terms of luxury and refinement. It accomplished this goal easily, helping to move Las Vegas out of the family-friendly doldrums of the 90s and make it a more adult-oriented resort town once again.

Although you’ll find a lot of fascinating things to see and do inside Bellagio, you’ll have a highly memorable time visiting the resort even if you never set foot through its doors. This is all thanks to the immense water show that’s constantly running in the 8-acre man-made lake which separates Bellagio from the Vegas Strip.

The Fountains of Bellagio were designed by WET, the same water design company responsible for Aria’s fountains and the volcano lagoon at the Mirage. Intended from the outset to be a world-class display that would become iconic, the fountains accomplished that goal as thoroughly as Bellagio’s fine art and Cirque du Soleil show made the resort a hit. The fountains were designed to combine active water features, innovative lighting, and impressive audio to create memorable presentations.

The gear that makes the magic happen is nearly as impressive as the fountains’ shows themselves. More than 1,200 individual nozzles are responsible for throwing water around during a Fountain show, with the most powerful jets reaching a height of 420 feet. (That’s as tall as a 24-story skyscraper.) During the most active parts of a show, there can be up to 17,000 gallons of water in the air.

The fountains also use a collection of over 4,500 lights (sometimes including the facade lighting of the resort itself) to increase the jawdropping majesty of their shows. Bellagio’s fountains have been a major undertaking since they were first imagined. Initial construction cost an estimated $40 million and keeping the fountains in tip-top shape occupies the attention of 30 full-time employees.

While you might hear persistent rumors stating that the Fountains of Bellagio are filled with wastewater from the resort, you needn’t shudder away from any incidental splashing. There’s no truth to the “greywater” rumor; the fountains draw their water from a freshwater well originally drilled to water a golf course. As impressively ostentatious as the fountains are, they still draw less water from the well than the original course did.

Since the opening of the Bellagio resort, the fountains have followed an extremely consistent show schedule. Individual shows are choreographed to a specific song, with both lighting and water effects designed to complement the music.

The fountains shut down every night at midnight. Shows begin at 3 PM on weekdays, noon on Saturday, and 11 AM on Sunday. New shows start every half hour up until 8 PM, at which point the fountains switch to a quarter-hour schedule. Currently, Sundays are highlighted by a full day of 15-minute scheduling, making Sunday afternoons the perfect time to stop by and relax.

Each show is preceded by “warm ups” prior to the start of the music. These feature low-key water nozzle activity and rising illumination. Note that the fountains are sometimes shut down for special events or dangerously high winds. Special occasions may also entail putting on unique shows.

For all of their technical wizardry and multimedia artistry, the best feature of the Fountains of Bellagio might be the fact that they’ve always been completely free. As long as you can find your way to the intersection of the Strip and Flamingo Road during the hours of operation, you can enjoy the fountains for as long as you like.While few trips to Las Vegas suffer from a shortage of sights to see and things to do, make sure your next visit includes taking at least a moment to check out the Fountains of Bellagio. Even the most hardened gambler will admit that the dancing waters make for a beautiful sight.